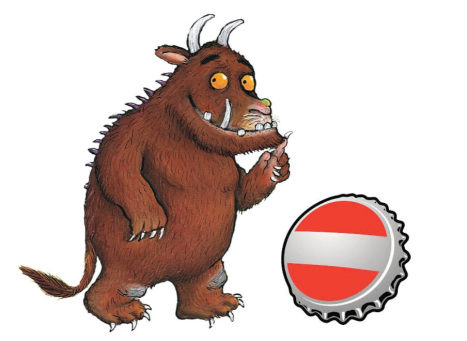 Once upon a time, my friend Jim Bozzini was not only a high-flying software executive but also a Stay at Home Dad (SAHD). Over a couple drinks at a party recently we started swapping SAHD stories like two guys in a support group…. “Hi, my name is Jim, and it’s been a few years since I was a SAHD, but I’ve got a great story about a baby and a bottle-cap… and a fire station.” Hold. The. Phone! A SAHD story about a baby, a bottle-cap, AND a fire station?! That’s like the royal flush of SAHD Tales! Solid gold SAHDistry! And now, for your enjoyment, here is Jim’s story:

One day while SAHDtending his ittybitty baby daughter, Jim was drinking fizzy, flavored, sugarless water. (Why girly water, you ask?… Apparently, he liked the zero calories which helped maintain his SAHD physique.) Plus, the big blue screw-on bottle-cap made it easy to “keep the fizz”.

Like a good SAHD, Jim realized that the big blue bottle-cap would make an excellent homemade toy as well! And soon enough Jim’s baby daughter was happily playing with the big blue cap. Nothing to worry about, he thought. And, BONUS(!), she’s exercising her fine motor skills, right? Clearly, the bottle-cap appeared to be bigger than her mouth. It’s not like he was letting her play with Legos or something! Plus, Mom wasn’t around to see the shenanigans, so all good.

Suddenly, the baby started crying. Then screaming. Then hyperventilating. Jim looked around and realized the bottle cap was gone! Where was it? In a fizzy flavor-water induced panic he deduced that she must have swallowed the bottle-cap!

Like a good SAHD, Jim immediately went into problem-solving mode. “But, which first-aid strategy should I use?”, he thought. “Should I do the Heimlich? How do I do that for a baby?” He remembered something about holding the baby upside down, so he did that. But nothing came out other than some smelly sour milky stuff all over his SAHD flip-flops. OMG, she only started crying more! But, at least crying = air = breathing… which is good.

Thinking quickly and realizing he had a limited amount of time until his wife discovered this cluster, Jim hustled to the one place where other men could help him. The local fire station!! A burly, thickly mustached, thirtysomething fireman answered the door. A Stay at Home Mom (SAHM) might have been like…“oh-la-la”, but not Jim! He was focused on being a hero! Unimpressed with the SAHD heroics, the fireman gave Jim the bro YSADA look (You’re-Such-A-Dumb-Ass) and convinced him the baby could have never swallowed such a large object! Plus, the fireman was like, “Dude, did you expect us to use the hose on her? There is something called an Emergency Room? Duh!” (Okay, the fireman didn’t actually say that, but that’s what I was thinking when Jim told me this story!)

Upset and emotional, but in a tough-SAHD-kinda way, Jim brought his baby daughter back home. After sipping more of his zero-calorie flavored fizzy water he got his wits about him and eventually found the bottle-cap, lying sideways under the couch about six feet from where the baby was sitting. He also found yesterday’s mushed up graham crackers and the spare car key that he lost six months ago, but still, the bottle-cap must have harmlessly rolled away! And the bottle-cap, just like the Gruffalo – that fictitious children’s book character fearsomely conjured up – simply disappeared into the woods (or in this case under the couch).

When Jim’s wife, Eng, came home she interrogated him…. “Jim, why was the baby crying!?”

“Um, no problem dear, just a little diaper rash. My new friends at the fire station said nothing to worry about,” Jim cooly replied.